So; I live in a place where my hairdresser (who has perfectly foiled highlights and beautifully manicured nails, of course) brings me a hostess gift of confit lapin when she comes to dinner. That she hunted herself, on Miquelon.
I’ve always known that Artemis was a dedicated huntress. Our first dinner invitation; on our first visit back in 2016, was to their house. The menu? Fondue; with venison that she had hunted the previous autumn ….. so that kind of sets a scene, don’t you think? These are people who take food seriously. They are French, of course! But they live … well, in an interesting place, and it breeds interesting people.
Artemis has been a mainstay of my early life here in the Gaulish Village. Not only does she do my hair (a very very important thing if you know me at all!) but she escorted us on our first trip to Langlade; bringing a picnic and setting up a bonfire on a remote beach populated by seals; with home made cake (brownie with local goats cheese) and wine which we enjoyed in the dense fog …. So dense that when I returned a few weeks later in bright sunshine I was amazed to see the islands of Newfoundland just a few kilometers away …. On that previous visit, we appeared all alone in the world.
Somehow this juxtaposition of the banal civilisation of hairdressing and hunting, being so close and yet so far, is the most explicit way that I can find to even approach living on planet St Pierre. Artemis, the huntress who coiffs and cooks … 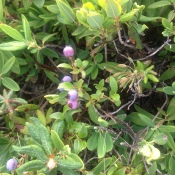 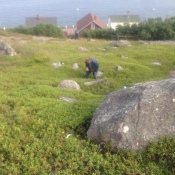 Obviously I’m only just beginning to scratch the surface. It’s only been just over a month that I arrived with the menagerie; and with the knowledge that I was ‘here to stay’; so much a different feeling and approach to my previous visits. People keep asking me when I’m leaving again; as almost no one who lives here goes any length of time without a trip to at least Newfoundland. I’m not sure … I had toyed with the idea of going to London for my cousin Fabulosa’s 40th but negotiations on the sale of the boat nixed that and to be honest I’m not ready to run yet. For one, while the two cats and Rudy have settled well I’m having terrible problems with Izzy who insists on peeing inside the foyer every evening; and will poo there if she feels she’s too separated from me.
I’m definitely committed to coming to Scotland for New Year to see Uncle B and Mirabella; and have a flight booked to get to Germany in late January next year. In the meantime, the GC keeps talking about going to Newfoundland and indeed we have a shopping list that’s growing by the day.
On its own it does my head in that people – everyone! – plan days in Newfoundland to go SHOPPING. Let’s get this straight. It means going TO ANOTHER COUNTRY; usually by boat. You arrive in a place called Fortune, which if my experience in travel has taught me anything, will be anything but fortunate. It can’t be, because no one actually stays there, no; the four hour trip to Fortune is then followed by a SIX hour drive to somewhere called St Johns (which has an international airport, a mall and a COSTCO …. The reason for our pilgrimage).
The reason one does this (and I am obviously yet to do this but the pleasure awaits very soon as we are running out of lots of things possibly not the least of which is apparently our sanity) is that everything here that isn’t free (ie that you can shoot, catch or grow!) is bloody expensive. And I mean, expensive.
Food is outrageously expensive; with chicken costing around 10 euros a kilo and beef around 25 euros a kilo. I don’t even look at the price of vegetables, which come in once a week from Halifax on the Nolhan Ava; I just buy what we need so I’ve learned quickly to go shopping on a Monday afternoon. By Wednesday our local supermarket is sold out of fresh veggies; and the only course is to go to the big supermarket, Dagort, where you can always pick up packaged salad mix and the like; at 4 euros a bag!
I won’t talk about the quality. I learned on the Atlantic crossing the difference between supermarket veggies and market fresh ones and these are no different. I was happily surprised to find that the Maison du Cadeau (a rather smart shop that sells homewares and speciality foods; hand made chocolates, tea and the like) was importing fresh veggies from the Annapolis Valley (in Nova Scotia) each Monday. They were easily twice the price of what was available in the supermarket, but superbly fresh. Unfortunately that is now over; and it’s going to be a long hard winter full of cabbage, I can see that now!!!
So I understand why everyone goes to ‘Newfieland’ to shop. Mind you, we have to payDUTY when we arrive back here – one of the reasons the food is so expensive, I assume. The duty situation is just ridiculous; there is a 40% LUXURY tax on shampoo, for heavens’ sake. And everything that arrives for example from Amazon is dutiable as well – and the duty is damn well charged.
Actually getting things here is an additional challenge.
The Canadian Post Office doesn’t seem to have the foggiest notion of where St Pierre is. I posted a bank card to the GC when I was last in Halifax, and it took nearly a month to get to him – via Paris. Let me remind you that Halifax is one of the only three destinations in Canada that is actually directly linked by air with St Pierre ……… and the plane carries mail. Sigh.
I tried the alternative, which is having things sent directly to Air St Pierre’s Halifax office and having it air freighted here. That has worked perfectly but the minimum charge is 23 euros for the flight; you still have to pay duty to clear the items and the whole process (going to the airline office to pick up the airway bill; then going to customs and waiting and paying the duty, then going back to the airline office to pick up the parcel) can take a couple of hours. Oh, and once they actually gave my parcel to someone else and it took me two weeks to get it back. Let’s just say you have to factor in all those costs before you figure out if that purchase is worth it! I’ve cancelled my Amazon Prime account. They don’t deliver here anyway ….
And we’re heading for Newfoundland.