Hard to believe that it’s been four days since we set off.  In some ways it seems like yesterday; in others years ago.  We are starting to get into the rhythm of the days at sea; on watch; sleep and wake and cook and eat …. Read in the middle; do some sewing as we are starting to work on a ceiling to enclose the galley area.  It’s been getting steadily warmer as we headed south; but one day it will be chilly and we will be happy to have less wind and draught around our cosy galley.

Where to begin.  First with our route I guess; we are taking the classic route to catch the trade winds – south to just north of Cabo Verde; then tracking west.  Our crossing began as we left Las Palmas; we are now quite far out into the Atlantic.  We are now heading seriously westerly; and have much lighter winds than forecast but are making excellent time thanks to the smaller gennaker.  We were only doing 5 knots yesterday afternoon on the genoa, main and one engine; with the wind dropping the GC decided to raise the gennaker.  It’s given us up to 7 knots improvement; and with the added advantage of no fuel usage as we are simply sailing.  Averaging 10 knots with plenty of time at 11 or 12, we are doing well for fu el.  If we need it later, we will have it which is good.  The gennaker is actually a bit big for us; in stronger winds we might be over powered; but in these light winds it’s a fantastic asset. 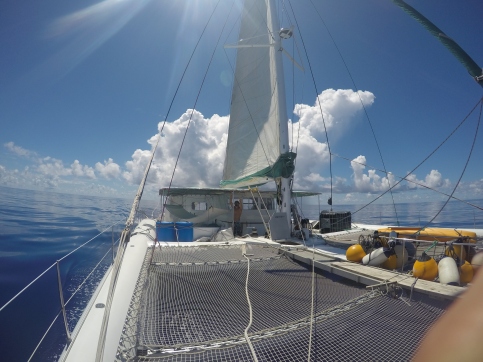 Again, it’s a whole new facet to the character of the boat; when you thought you knew all the noises that it would produce the addition of a new piece of kit changes the whole scenario.

We still don’t really know how we will track once we turn north again. It’s not likely that we will stop in the Bahamas but we may make Bermuda. That’s IF the winds don’t hold for us and we simply head straight for St Pierre.

We see no ships; no other boats even on the radar.  Plenty of birds and SO MANY flying fish it’s just not funny.  The poor things suicide by the hundreds on our deck each night – that’s not an exaggeration.  Yesterday morning I was on the 4am watch and threw around 20 of them back into the sea as I walked around the deck; and at 8am in full daylight I did a final sweep and found 27 of the stupid things on board; and counted more than 30 in the nets.  Most of them are dead by the time I get to them; but they all go overboard anyway.  They are notoriously not good eating, very unfortunately. 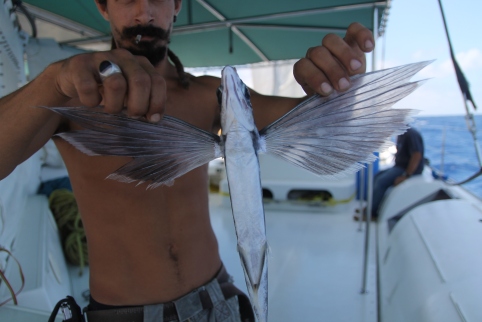 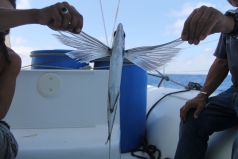 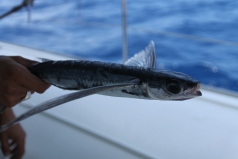 Especially unfortunately as we haven’t caught a single fish since we left Las Palmas.  The GC saw a brown shadow following us – either a shark or a big mahi mahi – and re rigged the lines for mahi mahi which are my favourite fish; such good eating, but still not as much as a bite.  All we caught yesterday was a bit of floating garbage.  Quite worrying on many levels; not least because my catering was predicated on a main protein diet of fish.  I need to redo my stocktake but have figured that in case we run non stop I have to reckon with 3 eggs a day so baking needs to be pretty carefully thought out. Food of course is our rallying point.  Yesterday we started baking bread in earnest and produced not only a great wholemeal loaf but some fabulous pizza bases as well.  Pizza night!  Went over well.  Thanks very much to James for the tweak to the bread recipe; adding a couple tablespoons of olive oil; it’s working a treat.  Everyone likes to take a hand at
kneading; the Genie has given today’s loaf and a brioche a good thumping.