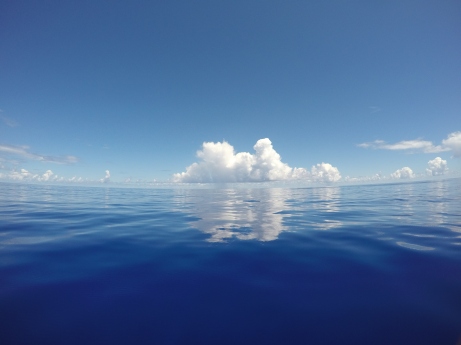 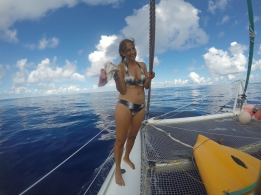 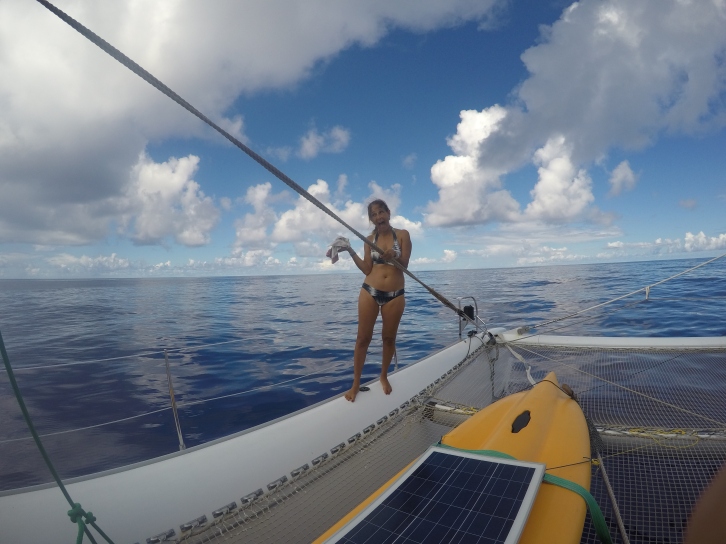 Yesterday evening I was privileged to see what I think is one of the most
spectacularly beautiful sights in the world; literally a 360 degree sunset
The sea was completely calm; a silk carpet to the perfect horizon all
around.. The entire horizon was surrounded by clouds; tall cumulo nimbus
clouds reaching up into the sky.  As the sun began to set it was behind
one of those tall clouds and we finished preparing for dinner; Betrave
mixed us a pina colada and we went and sat on the front of the boat to
watch the sea and the sunset.  This on it’s own was beautiful; serene and
so peaceful; the sunset; the boat cutting through the silken ocean; the
occasional flying fish breaking the surface; the odd patch of floating
weed and the sky; completely cloudless above us but with these clouds on
the horizon all around and the colours changing ever so imperceptibly from
deep blue to dove grey.  I really didn’t realise it but the best was yet
to come.

I came back into the galley to do the final fiddling about for dinner and
the guys were transferring fuel from the big tank on deck; when the GC
called me to come out.  The sun was finally setting into the last bank of
clouds over the horizon; but all around us – literally, 360 degrees as you
spun – every cloud that reached up to the sky was rose pink; based in a
lower bank of dove grey.  In a fabulous reflection of the sunset pink; the
clouds directly opposite seemed rosier and brighter than the ones to left
and right; but all towering into the sky dove grey and pink – and all
reflected in the sea.  So the water; from us to the horizon all around was
also dove grey and pink in columns that reflected each of the clouds; and
this got deeper and more and more beautiful as the sun so slowly dipped
into it’s bank of clouds and then beyond.  We were suspended in a world of
total peace and beauty; dove grey and rose pink brightening and deepening
and then so very gently fading away; softer and softer as night fell.
Words can’t describe how intensely and hauntingly beautiful this
experience was but I do believe it’s the most beautiful natural phenomenon
I’ve ever seen – it must compare with the Northern Lights.  The whole
thing lasted maybe two hours; from when we went on to the front deck at 6
to nearly 8pm.  This is when I really miss my good camera; tried to take
photos with the other phone but the colours are so washed out.  I hope
that Betrave has better ones on her proper camera; not that seeing a
replica will ever be able to replicate the moment – the boat alone on the
sea; the end of such a beautiful day; the perfect peace and serenity and
the breathtaking beauty all around.  Truly the experience of a lifetime; a
moment that you never want to end except that with each passing moment it
becomes even more beautiful and more incredible.  What a privilege; what
an experience.

And then came the dawn of today …. A repeat experience in muted colours of
the sunset of last night; culminating in the sun rising as an edge of
molten lava on a wide bank of cloud – so that it was not so much a point
of light but a bar of bright and ever brighter edging to the bank of cloud
– before the sun finally broke through.  To the west; the sea was dove
grey; with a band of pure pale duck’s egg blue sky topped by a rosy bank
of clouds.  Unbelievable beauty again.  But the perfect calm is already
over; tiny frissons of breeze reach us; the water is once again ruffled
with a rare breaking crest.  There is a large long low swell and the
clouds are starting to turn into cirrus with a few stratus higher up; wind
is on the way.  We work harder to clean the boat of her travel stains;
after this quiet we are expecting up to 20 knots to help us scream home
which means lots of water on board – ergo all jobs to be done now.  We
polish the stainless steel; getting rid of the marks and rust spots that
have accumulated over the last month or more; the galley gets a spring
clean and all the rusty marks on deck from bits and pieces of tools and
equipment are doused in acid and washed away.

The GC and the Genie are working on starboard engine; there is a fuel leak – probably from something not properly tightened when they worked on changing a sensor
yesterday.  STRIKE!  A fish!  This time something we can’t identify; it
looks like a green version of the silver dorade that are so popular in the
Med.  It’s quite small – around 3 kilos – so I will roast it whole.  But
not tonight!  Tonight we will eat pork ribs; more of our stock from Spain.
Betrave and the Genie chose them in the supermarket and have been hanging
out for the day I bring them out.
I feel strangely out of sorts today.  I woke up too early for the watch;
and before I could get back to sleep had the night demons take over.  I
worry about my son; about my mother; about everyone and everything ‘out
there’ in the world.  Why haven’t I heard from them?  What’s going on?
Why have I taken every decision I’ve ever taken? Could I have made
different choices?  Why didn’t I?  Why why why why why why why?  Silly
damaging thoughts that have no place in my head; but there they are.
Unwelcome guests; refusing to leave.  So far they haven’t just spoiled my
night, they are spoiling my day as well.  I think it’s the impending end
of the voyage that’s affecting me.  Having put so much effort and energy
into the trip I need time to process the fact that it’s actually going to
end; that having been so much a prospect; a project and a focus of effort
that it will be a done deal, in the past … and not having any really clear
project or ‘next thing’  to focus on I guess adds to the dissonance.  Just
before we left, my friend Nasib said ‘oh, it’s so wonderful not to have an
agenda or a schedule..’  something that the GC and I discussed, with
pleasure; as a benefit of being where and who we are right now.  But it’s
a two edged sword; especially for someone who’s always had the ‘next
thing’ almost too well planned – one of my great shortcomings has always
been that I’m often into the next thing well before I’m out of the first …
nothing I love more than a new project!  Standing on the brink of
finishing one project without a concrete new project .. well for me that’s
very scary.

That was supposed to be the end of that post; but with lunchtime came news
from Michel; our router in France.  Tropical Cyclone Gert is blowing south
of Bermuda; a nice long way away from us but still any cyclone is too
close for comfort.  I could say a lot about my uneasy feeling of the day
but now all that upper stratus cloud makes a lot of sense; as do the
cumulo-nimbus off to port.  Michel is calculating the ‘cone’ of the storm;
it’s projected path; and he will continue to do that and update us every
few hours; and advise our course to best deal with the situation.  At
present the plan is to allow it to pass between us and the mainland of the
USA and ride it’s wake home.  He may ask us to slow down or even stop to
allow that to happen; already we have turned East to put more room between
us and it.  In the meantime, we continue with preparations for wind and
swell.  Again, it’s a long way away and we intend to keep it that way, but
it’s going to be a bumpy (and wet!) ride!  We are only 700 nautical miles
from St Pierre; three days …. Inshallah!

One thought on “One Perfect Day”